Never, ever, write off July

The main reason for not doing much blogging this year was because, year-on-year, I found that I was ending up typing the same stuff that I did the year before, and the year before that, etc.  But looking through my notes over the last few weeks, there's quite a bit to write about actually.

Always plenty of after-work daylight in July of course, and eventually the pollen goes away.  This one's a been a bit hot though.  But after last summer, that shouldn't be a reason to complain.

The juicy stuff's on the way.  But going back to the July 7th, this smart(ish) male Ruff was found at Uttoxeter Quarry.  Still with quite a lot of it's summer plumage intact.  But one disadvantage of a hot, sunny day is that it's difficult to see anything in the camera when digiscoping. 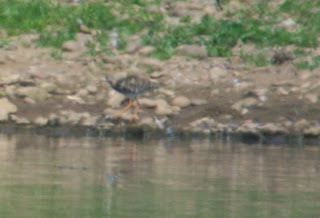 A Garganey was found by Andy at Croxden Quarry a few days later, on the 10th.  Unfortunately I was indisposed that evening, but it was still present the following day.

The white tail was a bit of an oddity, must just be slight genetic mutation going on.  The weekend of the 13th/14th produced some good waders at Blithfield.  Including a Wood Sandpiper, Greenshank and also these four drake Common Scoters. 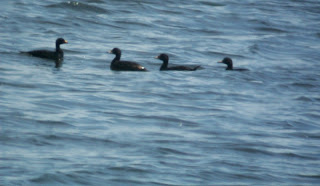 Then onto the madness of the last few days.  When looking at the pager on Wednesday evening, "Caspian Tern in Cheshire, Acre Nook Sand Quarry".  That's nice, I thought, and thought no more of it, apart from let's look for it around home the next evening!  So when I was on my way to Uttoxeter Quarry that evening, there was a call from Andy.  "Shall we go for this Caspian Tern?  It's back in Cheshire!".  In a way it was a bit of a blow, but after 20 years since seeing my last one in Britain (Willington in 1993), what the heck, let's go.

Acre Nook Sand Quarry is situated near Chelford in East Cheshire, about halfway between Knutsford and Macclesfield.  On arrival at 9:20pm, it was starting to get rather dark, but the Tern was visible enough.  A very nice relaxing way to end a day, a little trip into Cheshire.  But the thoughts of "where's it been all day?" started going through my mind.

The next morning, whilst on a short break from doing some work and a little flick through that font of all birding knowledge on the web, Bird Forum!  Someone on the rare bird thread had mentioned that the Caspian Tern flew into Acre Nook from the south-east last night.  It then set me thinking "has this bird been getting to Tittesworth or Rudyard?".

So a couple of hours later, when the news broke that the Caspian Tern was indeed at Rudyard, it wasn't an entire surprise.  But it did make the Friday afternoon at work so much more nerve-wrecking!  What was a pleasant Thursday evening in Cheshire turned into a Friday evening that was much more serious, with a home-county tick at stake.  So come 5:30pm it was out of the office door on the dot, and raced up from Stafford, via Meir, Weston Coyney, Wetley Rocks, Cheddleton and Leek.  By the way, it wasn't a race up because that route is riddled with speed cameras.  It felt like an eternity to get to.

Just prior to arriving at Rudyard Lake, I drove past the familiar face of Mr Lee G.R. Evans parked up on the roadside, chatting on his phone.  No careless whispers there then!  Thankfully some other familiar faces of Steve Edwards, Heather Forbes and Ian Burgess were on hand to point out the Caspian Tern to me, pheee-ewwww!  And later on this was reciprocated with Steve "The Snapper" Richards. 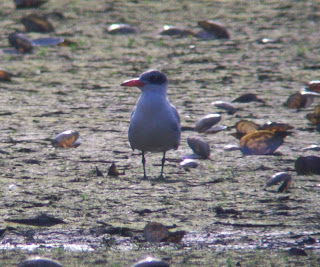 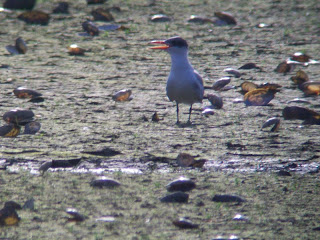 Steve and I watched the bird fly around the reservoir, catch a fish and then flew north.  If that returns to Acre Nook, then this could easily return the next day.  And it certainly did, both roost at Acre Nook and return to Rudyard.  So a bit of time was spent with the Caspian Tern the following morning (27th).  Got to make the most of it while it's here!  And did the pictures improve with the sun now behind me?  No, not really. 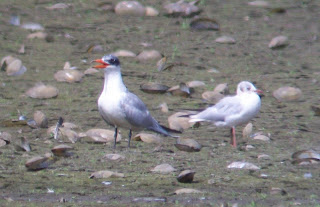 What a fantastic bird so close to home.  But what's at Uttoxeter Quarry?  Well on arrival there were 2 Black-tailed Godwits and this juvenile Med Gull. 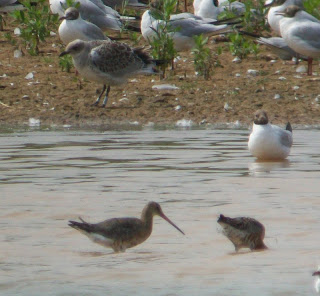 Look carefully reader, and you'll see this bird has a white plastic ring on it's left leg.  Usually whenever a gull has a darvic ring on, they're always too far away to read them.  But I could read this one.  The details have been submitted onto the Euring website, and looking through the ringing schemes I think this bird originated from either Belgium or Holland.

As for today.  Unfortunately the overnight rain meant that Uttoxeter Quarry has momentarily lost it's wader shoreline.  But Blithfield had a good selection of birds, which included these two Knot and adult Med Gull in Blithe Bay. 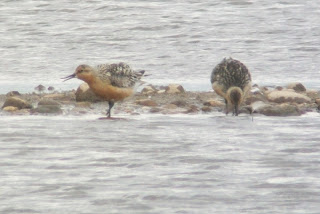 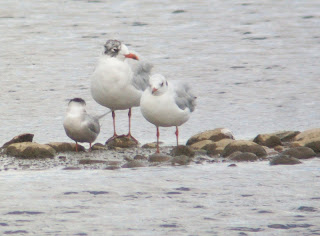 Nothing to see in July?  Pull the other one!
Posted by Richard Powell at 11:37

Richard Powell
near Stoke-on-Trent, Staffordshire, United Kingdom
Thanks for stopping by, and hope you enjoy my blog. Of my birding adventures, the odd dodgy bit of digiscoping/photography, and any other whimsical ramblings I can think of.

A Blog is for Life, Not Just for Christmas